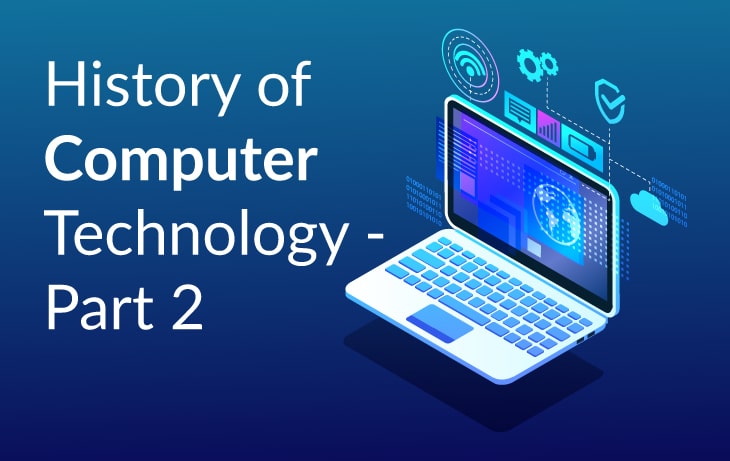 The History of Computer Technology – Part 2

We saw the background of Computer Technology & its nascent growth in Part 1 of this blog. Let’s see what happened next.

The fifth Generation brought parallel processing in use. Where machines will have numerous processors could be working on different parts of a single program. This generation saw an increase in computer networks, prior to this it was merely for organizations, office and research use. During this tenure, Intel’s IPSC-1 aka the hyper cube innovated the processing approach. It created a network interface by connecting each processor to its own memory. This approach eradicated the bottleneck of memory storage.

This generation was also called the PC Market, Partnership between Microsoft and Intel made a huge profit across the network. The operating system of Microsoft was used by 97% of computing devices across the world by 1990. While Intel dominated the microprocessor market, Microsoft had the upper hand on the OS region. Microsoft Windows 3.x which had intel Pentium chip in it disrupted the PC market.

In 1985, the 1st dot com domain got registered, named symbolics.com. Owned by Symbolic Computer Company from Massachusetts. And in 1990, a researcher from CERN – a high energy physics laboratory in Geneva named Tim – Berners Lee developed Hyper Text Markup Language | HTML.  Which brought up the era of the World Wide Web (WWW)

In 1990, the Pentium microprocessor amplifies the usage of graphics and music in PCs. And due to the increase in the use of graphics, a gaming era started for the world in the next 3 years I.e. 1994.

In 1996, Larry Page and Sergey Brin developed Google Search Engine. Which as of today are a mega-company and rules the tech world? By 1999, World started using the internet without wires, as term WiFi came into place.

Apple launched its new OS system named MAC OS X in 2001, which had slightly different attributes focusing on the protection of memory and pre-preemptive multitasking. In reply to this and to continue the rivalry, windows simply redesigned their GUI and launched Windows XP.

By the end of the 2000s, we got YouTube, Facebook and other various web browsers from different companies. Because of all this, computing consumption and functioning shifted to more compact devices of mobile – phablet, etc. A different rivalry started them with various companies putting out their best game in inventing devices that provide the best possible functions to consume and function computing activities.

The browser and Mobile OS Android partnered and produced a single OS layer topped the OS made by windows. Android had applications for a different use that can be used in all computing gadgets. This move of android resulted in the unbundling of Microsoft’s reign over the computing market. As the new decade started of 2010’s Android had taken over 80% of the computing market.

In the 2000s, We saw different gadgets like Tablet, Mobile Phones, Apple iPad, Mac, iPod, etc. Even in this market, the rivalry of Microsoft and Apple didn’t stop, yet android took over the game with its variety and innovation with various products in the market. Every year, we saw different applications and innovations coming in, From touch sensibility to fingerprints and much much more.

Google had its chrome book in 2011, a laptop that had inbuilt google chrome OS.

The race of innovation and invention of gadgets disrupted in the 2010s and is still on. Computer technology started shaping itself through social media and its trends. Facebook has 1 Billion users by 2012, Youtube – Instagram – Twitter, etc. having billions of users every day, etc. make sure that the computing giants are on toes to give the best product in the market.

Though the decade’s best thing became the use of network and cloud. Cloud helped in the storage of user data from different appliances and applications. Soon it became the focus of tech giants, and to date, Google – Microsoft – Amazon is competing over it through bringing in different things for Cloud Networking every year.

For a few years, due to an increase in competition over software providers and tech giants people’s data started getting manipulated. Companies became smart and started rolling out free software and networks to their respective users to get their data and monetize it. This activity resulted in market consolidation around FAANG. Facebook – Amazon – Apple – Netflix – Google. FAANG companies have made sure that they lock in their user into their platforms through powerful network effects. Hence, FAANG now shapes the future of Computer Tech as well as a cap over massive amounts of user data.

Well, there are many things in the future that we still await and it would take a separate giant blog to write. One thing we are sure of is that the technical paradigm will keep developing in the future, but we would be having a bigger responsibility in it. As the web in the future would be permission-less and trust-less. It would shape our civilization.