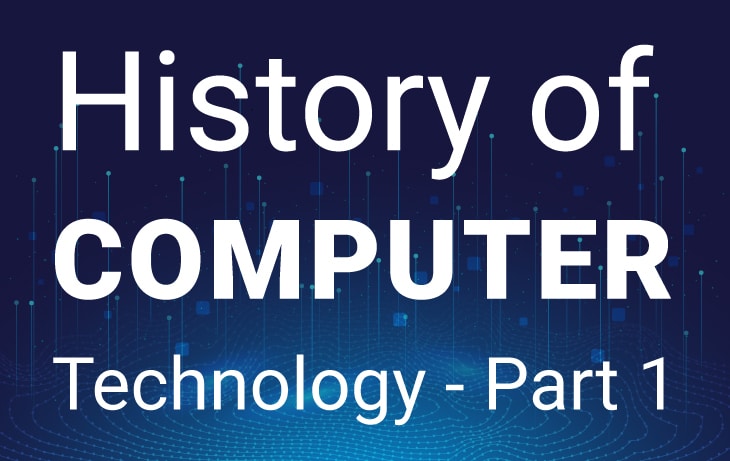 We are living in a world which breathes on technology. In the last 2 decades we are a living witness of how technology has reached from a specific sector’s work to our everyday life work. Today we will be sharing out information regarding one of the oldest and the base of modern technology: Computer Technology. The outright journey of computing would start from around 1623 BC, with many diverse device used for the purpose of computing. For eg. Chinese Abacus, Jacquard Loom, Charles Baggage’s – Analytical engine, other mechanical, analog and digital computing architectures.

Between 1936-1943, around 3 machines were promoted and told as the world’s first ever electronic computers.

1st Attempt –  In 1937, A professor of physics and mathematics from iowa state named J.V Atanasoff. He wanted to build a machine that could solve systems of partial differential equations for his graduate students. Years later in 1941, Clifford Berry, one of his students, was successful in building a machine that could solve 29 Simultaneous equations. Although, this function of the machine was more of taken as an electronic calculator and not as a computer. Because the machine was not programmable.

2nd Attempt – An electronic machine named Colossus was created just after the 1st attempt. Colossus was created by Alan Turning for British Military in the year of 1943. Objective of creating this machine was for breaking codes that were used by the German Army in World War II. Turing created a machine with mathematical formalism that got widely used in the study of computable functions, Called The Turning Machine. Turning and his colleagues got their credit lately, as british military kept everything related to Colossus as a secret until world war ended.

3rd Attempt – World’s first programmable electronic computer was built by J. Presper Eckert and John V. Mauchly working from University of Pennylvania. It was called Electronic Numerical Integrator and Computer (ENAIC). The work of creation did start in 1943 but then due to prioritizing its usage for world war 2, design of hydrogen bomb it got decommissioned. Although there was good use of it as it was used for designing wind tunnels, number generators and weather predictions.

Based on the principles of ENIAC itself, a new computer was formed from the member who use to work in ENAIC. It was called Electronic Discrete Variable Automatic Computer, which is also called successor to ENIAC. EDVAC focuses on the notion of storage of programs. Later in the decade, EDVAC project became a significant example of the power of interdisciplinary projects that also in the future characterized modern computer science.

These 3 attempts of creation of electronic computers became a significant source in growth of applied science and engineering.

In this second generation different high level programming languages came into action. It was the time where technology important for creation of basic circuits to the programming side of the scientific applications all of it came into development.

In 1954 John Backus and his team sourced from IBM developed a programming language called FORTRAN Programming Language aka Formula Translation.

In the same time, a new transistor technology was taken into consideration for creation of electronic switches. As it had switching time of approximately 0.3 Microseconds. Bell Laboratories in 1954 with use of the same technology created Transistorized Airbourne Digital Computer aka TRADIC.

In this era, innovation was at its peak. Invention and utilization of IC’s (Integrated Circuits), Semiconductor memories, Introduction of Operating Systems and time-sharing. In 1964 modern computers’ prototype was made public. Prototype having a graphical user interface and mouse. This evolution was very remarkable for the general public’s accessibility. In 1969, UNIX Programming Language became more mainstream in the ecosystem mainly used by the government and large companies. When Bell Laboratories produced unix, it did gain the attraction but it didn’t go long. As the new generations had different innovations, UNIX was proved to be comparatively much slower.  Intel Labs invented Intel 1103, first ever dynamic access memory chip in 1970. But soon after that in 1971 IBM scientists took out one of the best inventions of the decade as a floppy disk, allowing sharing of data amongst different computer units.

The Generation of Apple vs Microsoft

Decade of the 1970’s was already going in the best possible way. With increase in use of C and UNIX Programming language, and invention from Intel and IBM Labs. Yet in 1976 Steve Jobs and Steve Wozniak started something historical, a company which is still redefining innovation for computer technology. On 1st of April 1976, Apple Computers was started, it was the first and the only computer with one circuit board. Apple also initiated attributes of color graphics and audio cassette drive for storage in 1977 through their second computer Apple II.

In 1979, word processing was also started through Micro star known as Word star. Where words were written through command.

Soon after apple launched its computer, 5 years later IBM invented the first personal computer in 1981 called “Acorn”.  It had Microsoft’s operating system called MS-DOS, Intel Chip, Two Floppy Disks and a color monitor. This was the starting for word PC be marketed in the world, it increased the sales for outside distributors as well.

Being in the competition,

Apple also launched its first personal computer called LISA having GUI. And to answer the GUI, Microsoft launched Windows in 1985. Along with Apple and Microsoft, Commodore launched Amiel 1000, having advanced audio and video capabilities. And in 1983, Gavilian SC was the first ever Laptop Computer, which also became famed as the first ever laptop.

Hence this decade and this generation became a bigger catalyst to the growth of computer science and engineering. Post this decade the eco-system only went onward and upwards with some utmost human friendly inventions.